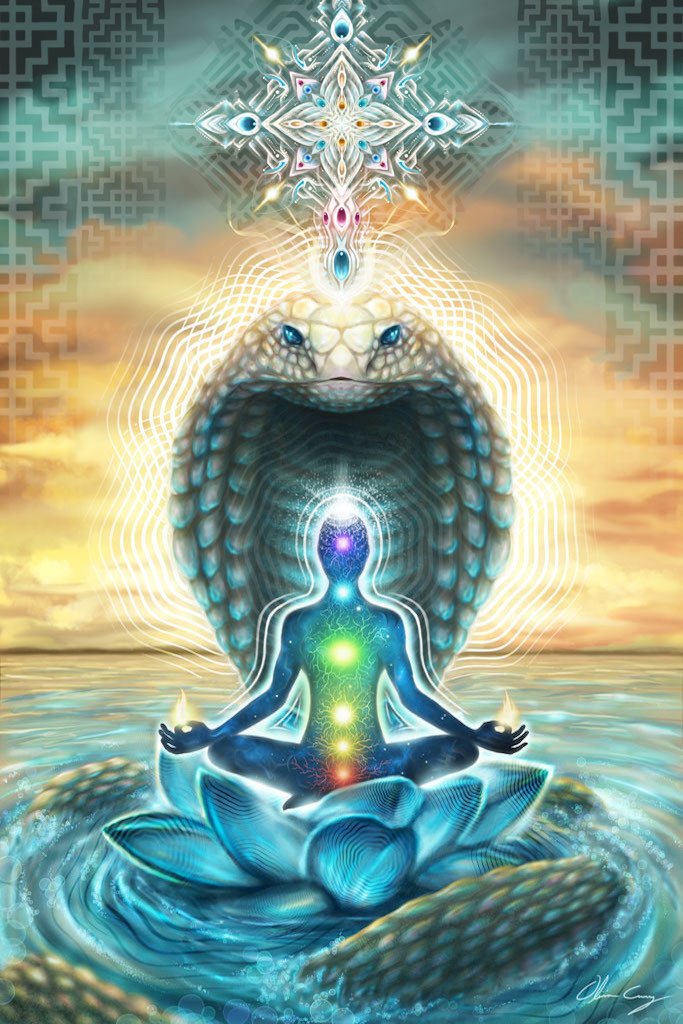 Kundalini is mythic, it’s this idea that your true self comes forward, moving from the depths of your subconscious to the surface; giving you so much energy; and the strength to become yourself. That’s the end result, but the first times it happens you actually will feel crappy, most likely, because a cleansing needs to happen first. Cleansing of your energy, of your chakras, of your beliefs; the ones you don’t need to carry anymore.

It’s an offloading, most of the time, you fall into this rather passive state where pain simply surfaces; it feels endlessly, sometimes accompanied with a minor headache, you are there; perfectly aware of what is going on, yet since all your energy is being consumed with cleansing, you can’t do much. Hold still, and wait; bear witness.

I was seeing a girl for almost 2 years, Myriam. Over time I learned of her true nature, but when the event I am about to describe happened I did not know who she really was. Still I was able to give her orgasms that lasted from a few minutes to almost 10 minutes regularly, almost every time we made love. It was beautiful, and this one time after we had a few fights in a row, she came to my lovely house and we made love in the living room in the sun repeatedly. until.. until the kundalini started flowing in her.

I had described to her how that felt, but until you live it its hard to relate. I have kundalini rising experiences on a regular basis, having meditated for so many years and being so dedicated to my healing process.

It started slowly, after the 4th 5+ minute long orgasm, I could have made her cum all day that day, I felt very sexual; and there was a mix of anger and love, which is potent, thrown around between us. She screamed very loud, as I penetrated her, pushing her entire body up and down, ever so more slowly. As I slow down, the pleasure becomes more intense, the energy rises from her sexual chakra to her heart chakra, and repeatedly so. It was beautiful, I love seeing/feeling that, I love the energy in the heart. It’s not only beautiful it is downright gorgeous to me. And suddenly she pushed me, she did that often right before the orgasm when we first started dating, and let go. A few minutes later, she told me she understood now, I asked her what she was talking about, she said: when you describe the pain oozing out of your body.

And so it started, she was rather silent, her breathing changed, became more heavy, as if doing some kind of intensive exercise, and she stopped moving. At first she was a bit worried, but I told her that nothing more would happen; that she just needed to wait and let the cleansing happen, that she could relax.

In those moments you experience many moments of clarity, where you understand things in a very specific way; things that you’ve been wondering about or have felt to be elusive in the past. She moved rooms, sat with her back against a wall with a blanket all over her and let her heavy breathing happen; focusing on what she was feeling and her thoughts. It all lasted at least 5 hours, before she fell asleep.

You have to understand people can meditate for years before reaching this state, and therefore sexual energy is VERY potent. If directed the right way, pushed in the right direction, ever so slowly, you can reach this state in a few hours with no meditation needed.

I was surprised for a bit, but then it makes sense. Sexual energy is the most powerful form of energy in the body, it is natural that it would cause a cleansing once enough has accumulated in the heart chakra.

I will remember that day for a long time to come. Unfortunately since Myriam (february?) I haven’t made any women have long orgasms, I almost feel like I retired by this point. Not that I haven’t had sex, it’s just so rare to find a woman who can “go there”. I hope it will happen soon again, I miss it. I miss the beauty of the moment, the green energy filling air around us, the ecstatic pleasure, the bliss.